In order to adapt the climate change, reliable information on future expected climatic changes is required. Possible future climate developments can be calculated based on scenarios and with the help of numeric climate models. These developments differ depending on the underlying assumptions on socio-economic scenarios and on future concentration of greenhouse gases and aerosols in the atmosphere.

Climate models are calculated on a spatial grid. Processes must therefore be parameterised on scales below the directly dissolvable model scales. In addition, not all processes relevant to the atmosphere, weather and climate are fully understood. These two reasons lead to the fact that models deviate from reality and that variations exist between the models. This again leads to varying simulation results for the different models. Furthermore, processes in the atmosphere are often non-linear. For the model calculations, however, the initial condition of a model atmosphere is specified. This is how slight changes in the initial conditions can lead to deviations in temporal climate development. 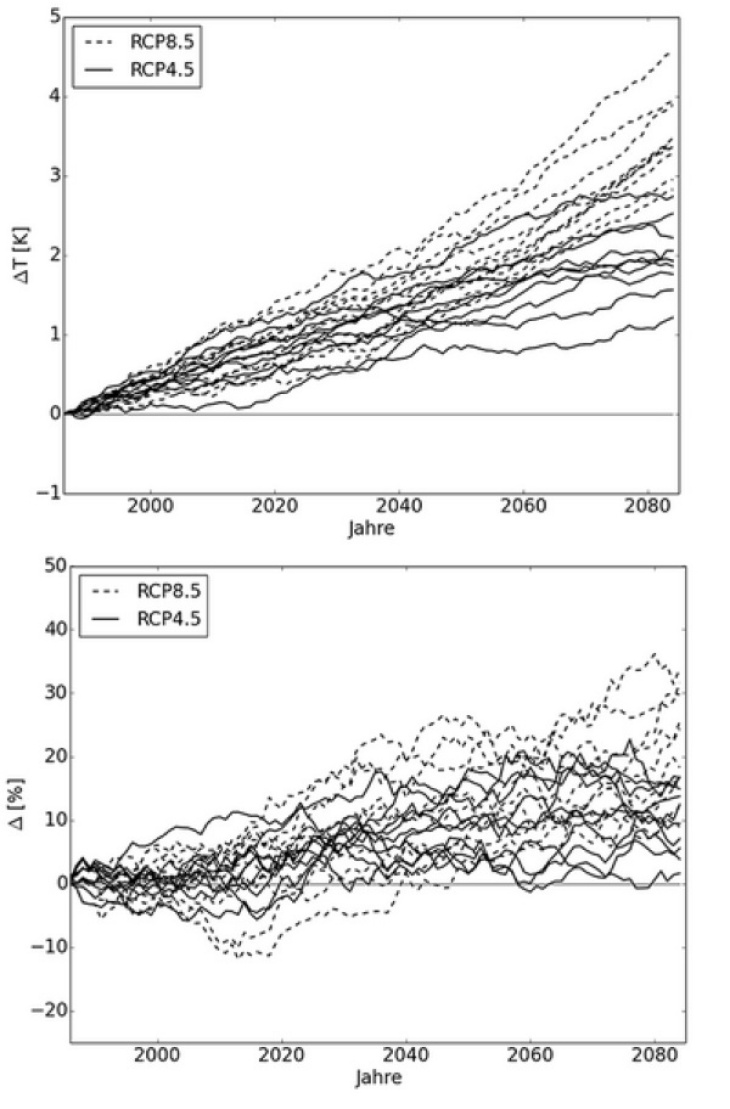 Above: Projected changes in annual average temperature ([K], moving thirty-year average relative to the period of 1971 to 2000) for the Elbe catchment area calculated from the EURO-CORDEX ensemble for RCP4.5 (solid lines) and RCP8.5 (dotted lines).

Below: Projected changes in winter precipitation ([%], moving thirty-year average relative to the period of 1971 to 2000) for the Elbe catchment area calculated from the EURO-CORDEX ensemble for RCP4.5 (solid lines) and RCP8.5 (dotted lines).
(Illustration: GERICS/HZG)

The database is formed by an ensemble of regional climate change simulations based on Representative Concentration Pathways (RCP) * RCP4.5 and RCP8.5.

The simulations were calculated and provided by the internationa EURO¬CORDEX initiative.

To evaluate the robustness of the projected changes in climate simulation ensembles according to provided criteria and to make the results of such evaluations quickly comprehensible and spatially visible, the Climate Service Center Germany (GERICS/HZG) has developed the climate signal map method (Pfeifer et al., 2015). "Robust" is thereby defined as the agreement of simulations toward the projected changes as well as with the portion of the simulations that project statistically significant changes. Climate signal maps, however, do not show all available information in the projection ensemble, but rather condense the information. They are thus comprehensible for non-climate experts as well.

Climate signal maps can be represented based on the models' grid points or on regions selected by the user. In addition, only one direction of change is always examined, either the increase or decrease. 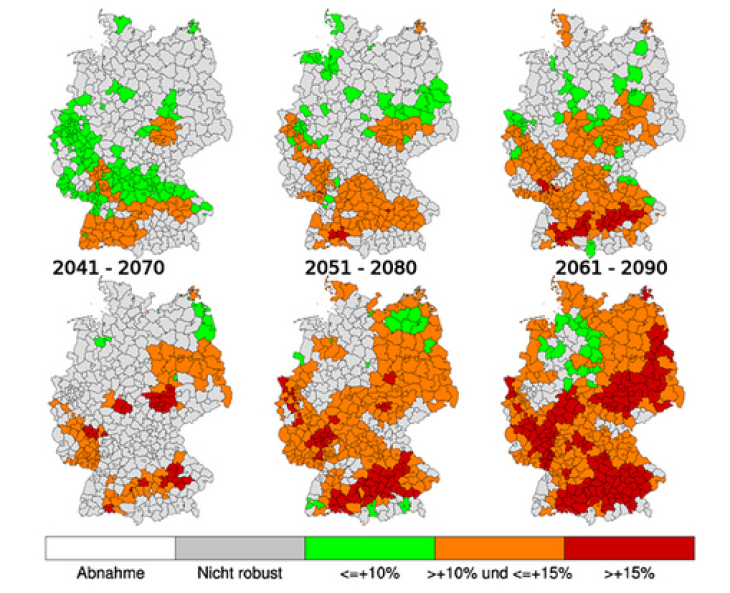 The figure shows climate signal maps for the percentage increase of winter precipitation based on the EURO-CORDEX simulations for RCP4.5 (above) and RCP8.5 (below) for three different periods (2041-2070, 2051-2080, 2061-2090). The reference period was set for the years 1971 to 2000. Robust increases are projected in the areas marked in green/orange/red.

The three colour stages represent different threshold values. They are set based on the increased median of < 10% / 10% to 15% / >15%. For the regions marked in grey, no robust increased winter precipitation can be derived from the ensemble. Regions marked in white, those areas in which the simulation ensemble would project a decrease in the median winter precipitation, did not arise in the computations.

The maps also show that the projected winter precipitation increases more heavily under RCP8.5 conditions than under RCP4.5 conditions. For the periods between 2051-2080 and 2061-2090, RCP8.5 clearly shows more regions in which a robust signal can be derived, while for RCP4.5, no robust increase in winter precipitation can be derived for all three examined time periods in many regions, particularly in northern and eastern Germany.