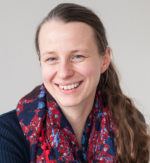 Dr. Diana Rechid heads the Climate System Department at the Climate Service Center Germany (GERICS) of the Helmholtz Center Geesthacht. Since July 2014 she has been working at GERICS in Hamburg on the development of climate services based on regional climate model simulations and researching the regional characteristics of simulated climate changes. One focus of her work includes the further development of a regional earth system model in order to investigate coupled processes in the earth system under the influence of human activities. In particular, she is interested in the land - atmosphere interactions under the influence of land use changes. Diana Rechid has been coordinating the international WCRP CORDEX Flagship Pilot Study "LUCAS - Land use and climate across scales" since 2016. In this project, the effects of land use changes on the climate in Europe are investigated by means of coordinated experiments with an ensemble of regional climate models.

After studying physical geography with meteorology and hydrology, she wrote her PhD thesis on biogeophysical interactions between plant phenology and climate variability in Europe at the Max Planck Institute for Meteorology. Since then she has been working in the core team of regional climate modeling in Hamburg and has contributed to the further development of physical parameterizations of land surfaces in the regional climate model REMO.

Since 2013 she has been teaching as a guest lecturer at the Leuphana University Lüneburg on the physical principles of climate change.