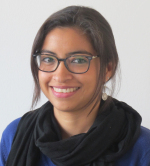 At the GERICS Tania Guillén B. is currently working as a research associate supporting the preparation of the Special Report on the 1.5ºC of the Intergovernmental Panel on Climate Change (IPCC). She also supports GERICS activities which aim to enhance the implementation of climate policies, specially planning and implementation of adaptation to climate change, which at the same time can contribute to achieve the sustainable development goals.

Previously, Tania was fellow of the International Climate Protection Program of the Alexander von Humboldt Foundation at GERICS, where she worked on the development of tools for climate change adaptation planning as part of the climate impacts and economics department.

Tania is graduated on Environmental Engineering of the Central American University (UCA) of Nicaragua and holds a MSc in Technology and Resources Management in the Tropics and Subtropics awarded by the TH Köln - University of Applied Sciences of Cologne, Germany. Tania has worked in relation to environmental management at the local level in Nicaragua, and also at the global level where she has specialized on the climate change negotiations under the UNFCCC, with focus on adaptation and loss and damage. She has also facilitated Latin American civil society networks related to the climate change negotiations. Since 2016 is part of the technical staff (ad honorem) of the Latin American and Caribbean Group on Climate Finance (GFLAC).