Product of the Year

Over the last few years GERICS developed different products and product ideas. The most important are listed below as product of the year.

GERICS Products in connection with the IPCC Special Report on 1.5°C Global Warming and the GERICS Federal States Check The IPCC Special Report on 1.5 ° C global warming is of particular importance to GERICS, as Daniela Jacob, as one of the three coordinating lead authors, coordinated Chapter 3, along with two colleagues from Jamaica and Australia. In this function she was the only scientist from Germany.

Many GERICS staff members also actively contributed to the preparation of this special report. In addition, many scientific information regarding global warming of 1.5 ° C have been prepared around the subject of the report, and with this new GERICS products were created.

GERICS and the IPCC Special Report on 1.5°C Global Warming 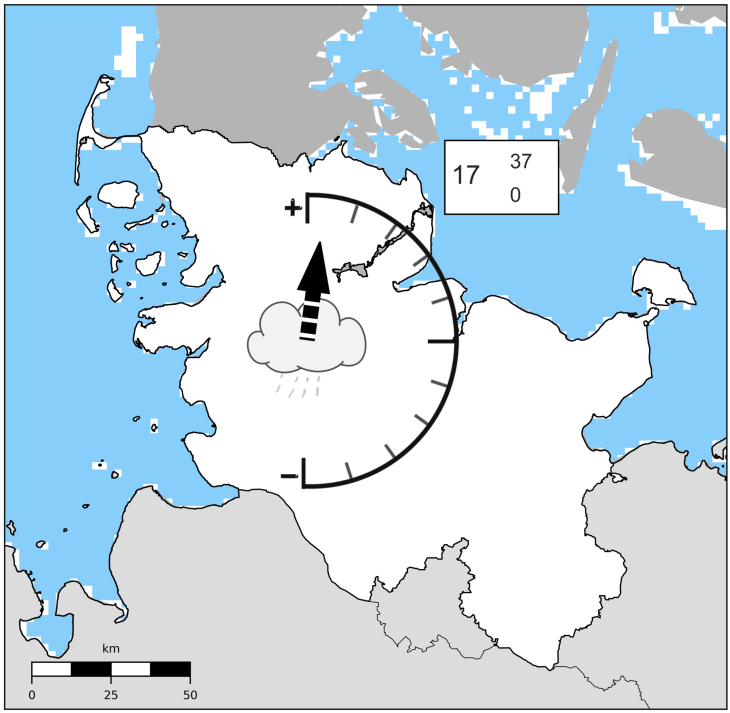 The summer of 2018 was extraordinary. Deviations from the expected climatic mean were already determined in the spring. The months April and May were the warmest in Germany since the beginning of the weather records more than 130 years ago. June and July stayed warm and were characterized by unusual dryness. In certain regions of the country, it has been raining very little this summer. July saw less rainfall in Germany than in the last 60 years.

Where in Germany are situations such as those we have experienced this year and last year becoming more frequent? GERICS creates clarity. GERICS Federal States Check 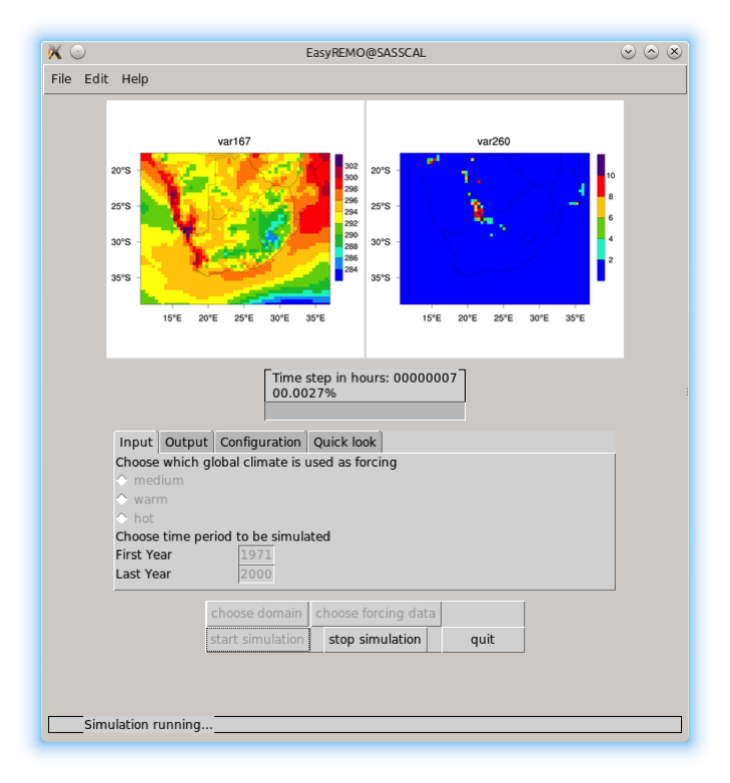 GERICS develops, maintains and uses the regional climate model (RCM) REMO. With this in-house RCM GERICS’ scientists are able to judge the quality, abilities and limitations of the models and their results. Moreover we can actively contribute to and shape major scientific activities such as CORDEX, which usually provides early and/or better access to regional climate model data which is key to the development of climate services products.

One of the major developments in recent years is a user-friendly desktop version of REMO (called EasyREMO), which aims specifically at users in those parts of the world without access to a high-performance computing service. In addition, EasyREMO can be used as capacity building tool, because it comes with graphical user interface (GUI) that does not require in-depth technical knowledge of how to run a regional climate model. The GUI enables the users to select their own model domain, to choose between two different grid resolutions, and to pick from two different climate change scenarios with a mouse click.
further information 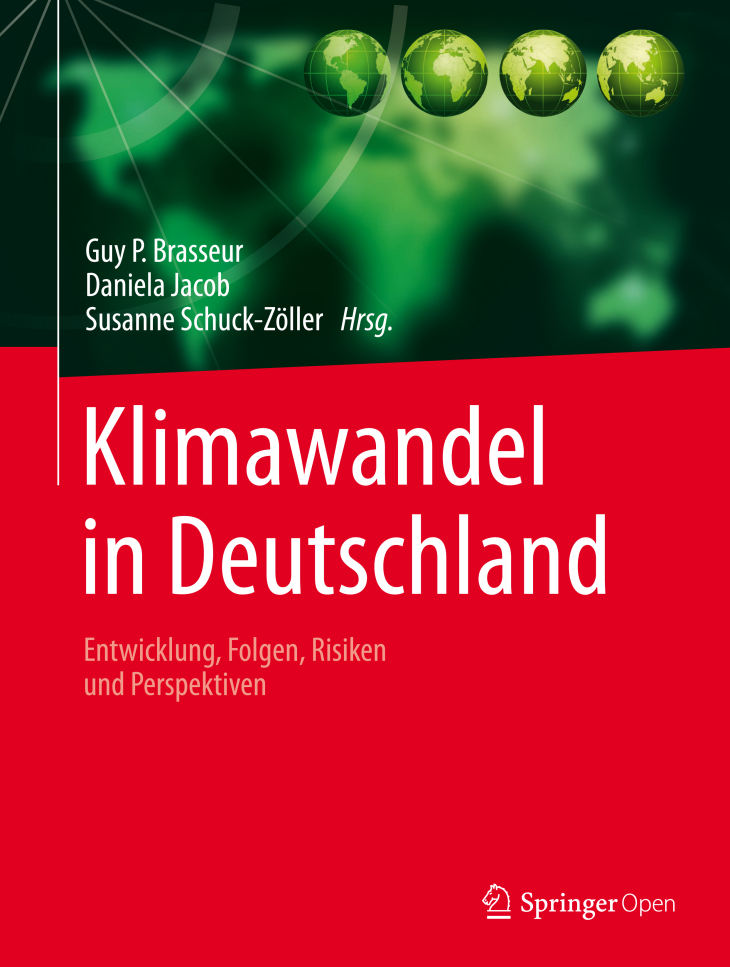 The National Assessment on Climate Change in Germany comprises the first ever collection and synthesis of all existing information about climate change in Germany. Thus the 5th IPCC Assessment Report is broken down to the national scale, enriched by additional information from "grey" literature, case studies and the authors’ own scientific findings. The German language book "Klimawandel in Deutschland" is meant to present state-of-the-art scientific knowledge in terms of the expressions of climate change, its impacts, deriving risks and adaptation options.

In an interdisciplinary approach the book merges all disciplines and topics. In addition to presenting climate change and climate change impacts the authors draw conclusions on the necessary responses. The key messages are summarized at the end of each chapter.
further information 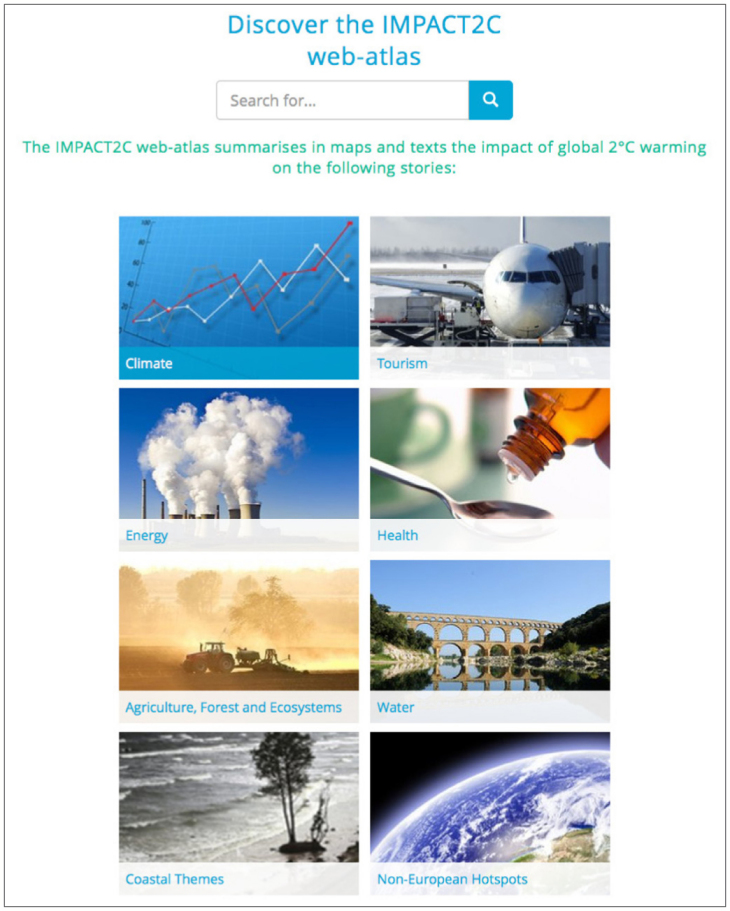 Parts of these questions have been answered in the IMPACT2C project. In order to present the findings of the project easily accessible for a wide range of users, the IMPACT2C web-atlas was developed. The IMPACT2C web-atlas depicts the climate change impacts of a +2°C global warming for the key sectors – energy, water, tourism, health, agriculture, ecosystems and forestry, as well as coastal and low-lying areas, – at both the pan-European level, and for some of the most vulnerable regions of the world. By using a multi-model ensemble of both climate and impact projections it is possible to define ranges of impacts and therefore quantify some of the uncertainty around future climate and climate impact projections.
further information 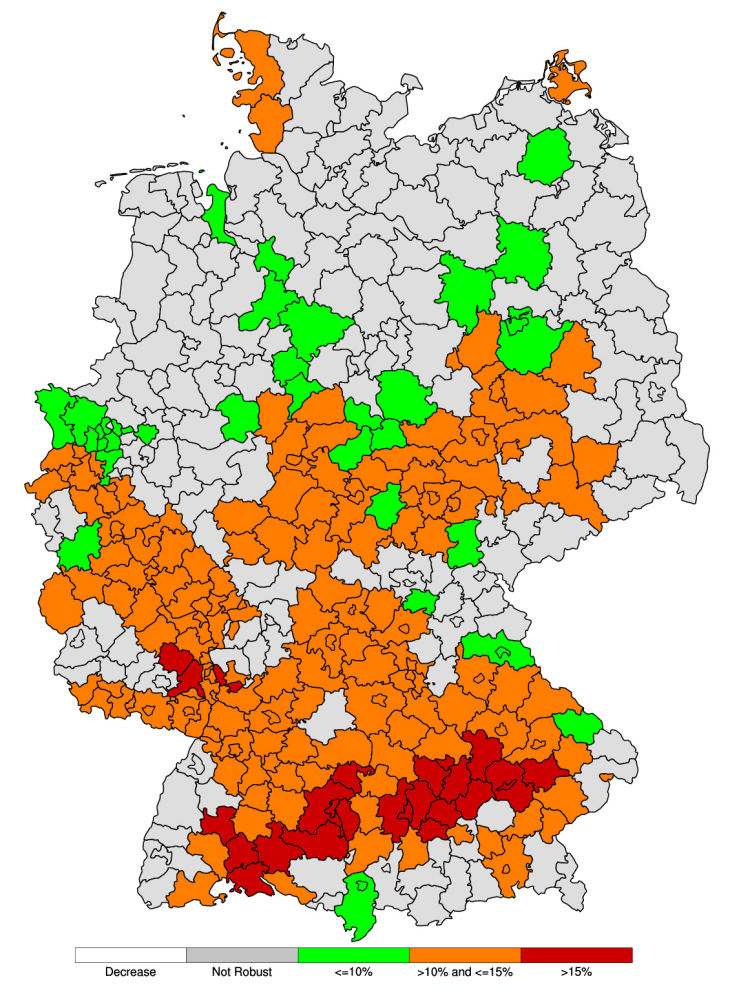 In order to adapt the climate change, reliable information on future expected climatic changes is required. Possible future climate developments can be calculated based on scenarios and with the help of numeric climate models. These developments differ depending on the underlying assumptions on socio-economic scenarios and on future concentration of greenhouse gases and aerosols in the atmosphere. 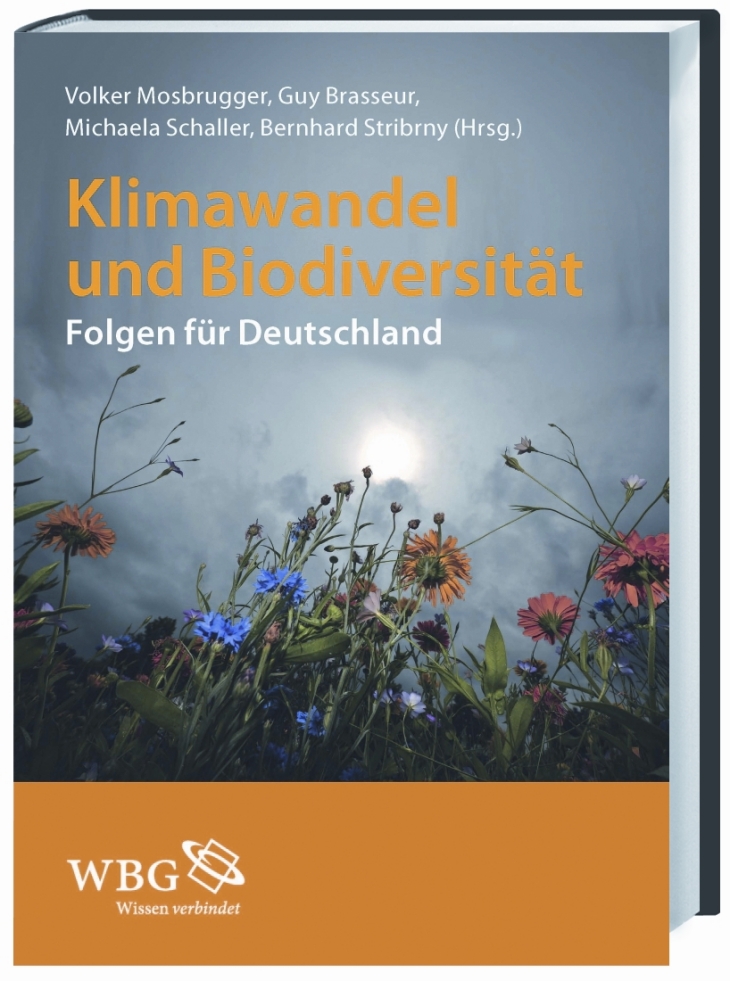 The status report summarizes the state of knowledge on the effects of climate change on biodiversity in Germany.

The looming loss of biodiversity as a result of climate change is considered one of the greatest challenges of the coming decades. The state of knowledge about the expected effects for Germany is summarized in the volume "Climate Change and Biodiversity: Consequences for Germany". More than 100 experts from different disciplines participated in it.

The impact of climate change on biodiversity has been published in recent years in numerous articles, and in various journals. So far, however, lacked a compact, generally understandable compilation of the current state of knowledge. This gap is closed by the status report "Climate Change and Biodiversity: Consequences for Germany". The editors of the most comprehensive compilation on this subject pursue an interdisciplinary approach: from climatology to biology, soil science and forestry to medicine and sociology, scientists from all relevant fields are involved in the volume.
further information

The modular designed advisory tool supports cities and municipalities in developing and implementing adaptation policies, considering both climate change mitigation and adaptation. Due to its modular structure, it is flexible and transparent and provides tailored advice. There is a direct interface between the adaptation toolkit for cities and the company toolbox.

The cities toolkit’s main goal is the planning of adaptation measures and their integration into existing planning processes in order to avoid additional pressure for the increasingly scarce human and financial resources at city administrations. This flexible structure allows to address each cities specific environmental and administrative framework. The development of practicable strategies or measures and their implementation is carried out in close cooperation with the contracting cities or municipalities.

The adaptation toolkit for cities provides in its standard configuration eleven module groups that cover the most important areas of activities of a city. Within each module group, there are one or more modules with specific priorities.
further information 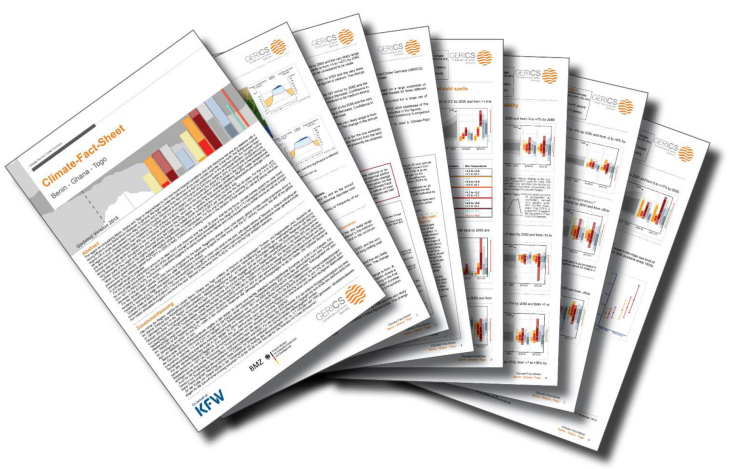 Many investment projects in industry and finance need to consider how they may be affected by climate change, before they are approved. These projects may take place in various countries, regions, or climate zones around the world. There are a range of different climatic data sets available, and careful analysis and compilation of these data is necessary to generate consistent results.

In a compact and concise form the Climate-Fact-Sheets contain the essential climate-characteristics of individual countries or regions worldwide on a few pages. The Climate-Fact-Sheets synthesise information on the potential magnitude of change of different climate-variables like temperature, precipitation or climatological water balance. In addition statements about the climate history and the recent climate characteristics are included.

The information about the possible future climate development is based on global or regional climate projections (depending on the region). A detailed manual on „How to read a Climate-Fact-Sheet“ is provided.
further information