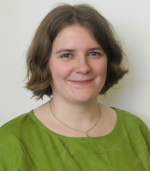 Clara Burgard has been working at GERICS since January 2020. She supports the Earth League as a scientific coordinator. The Earth League is a voluntary international alliance of prominent scientists from world‐class research institutions, who conduct research and advise decision makers about some of the most pressing issues faced by humankind, as a consequence of climate change, depletion of natural resources, land degradation and water scarcity.

After a Bachelor's degree in Geophysics and Meteorology at the University of Cologne, Clara moved to Hamburg and conducted a Master's degree in climate science. In both her Master's thesis and doctoral thesis, she investigated the current and future evolution of Arctic sea ice in climate models. First, she examined the drivers of the Arctic sea-ice melting, then she developed a method to compare sea ice observed by satellites with sea ice simulated by climate models from a new perspective.

Clara also thinks that more communication is necessary within the scientific community and from the scientific community to a more general public. In past years, she was involved in several initiatives promoting knowledge transfer with different formats, e.g. as chief-editor for the EGU Cryosphere Blog, as a co-developer for a role-playing game about Arctic sea-ice melting, as a member of the Twitter editorial team at the Max Planck Institute for Meteorology, and at the Hamburger Nacht des Wissens.